All over the world, exit polls are considered to be the gold standard in detecting the presence of election rigging. When the votecounts and the exit poll results are very different, it’s an indication that the vote counts may be wrong. It’s not proof of election fraud, but it does mean the election should be investigated. 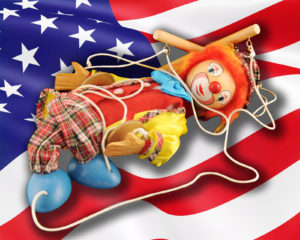 A disparity between votecounts and exit poll results is exactly what we’re seeing in the November 8 election. You can see the comparison at the links below. Presidential Race Senate Races In the images at the links, the right hand column lists the percentage of shift from Clinton to Trump in the Presidential race, and from Democrat to Republican in Senate races. We call a shift towards Republicans a “red shift,” and a shift toward Democratic candidates a “blue shift.” We are seeing no blue shifts in this election.

Outcome-reversing shifts are highlighted in red.

This is a familiar pattern, indicative of electronic rigging, but in this case even more dramatic than usual. With all that has been said and written about the vulnerability of the computers that count our votes in secret, one must ask why these votes and states shifted? And why the outcome-changing results are simply accepted as accurate and honest.

There is every reason to investigate and then recount key states by hand where possible. This is too often not possible, because some of these results come from paperless, touchscreen computers.

And even where possible, with optical scanners, it is just not done. Is it a patriotic service to our country — and the world — to passively and quietly accept the results from this election without review or inquiry? Let’s take responsibility and investigate where the evidence gathered places the validity of these results in doubt.

Where did this data come from?

The exit poll numbers are transcribed from screen captures of time-stamped CNN exit polls. Immediately after the polls close on election night, these figures were posted at the CNN website and other media websites.

The votecounts in most of the states in these tables are near 100% reporting, though some will have to be updated as remaining votes are tabulated. The red shift numbers may therefore change slightly by the time the final counts are available, but the general pattern is well established.

After the initial posting, exit poll totals are adjusted to match the votecounts. If you visit the CNN website now, it is the adjusted exit poll numbers you’ll see displayed there. The role of exit polls in fair elections is discussed in depth in my book, Code Red: Electronic Election Theft and the New American Century. View on Amazon Based on these preliminary but alarming forensic results, I call on County Election Directors, Secretaries of State, the United States Congress, and President Obama to initiate an investigation into the outcome of the 2016 election. [Image source: Derivative of image from CanStockPhoto/McIninch]