The Real Steal? A Forensic Analysis of the 2020 Election 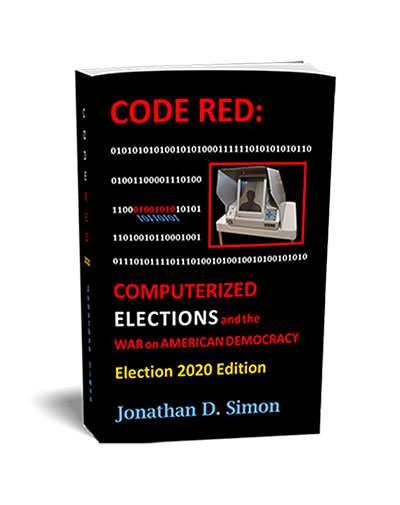 CODE RED is about election meddling and its impact on American politics since the computers took over the vote counting at the start of this century.

It is a compelling call to action, about saving our democracy and our country. Now, before it is all gone.

Expanded and updated edition for the 2020 election, now available here, on Amazon.

You will also receive occasional announcements and updates from CODE RED author, Jonathan D. Simon.
We honor your privacy.

Between Trump and a Hard Place: The Truth About “Rigged” Elections 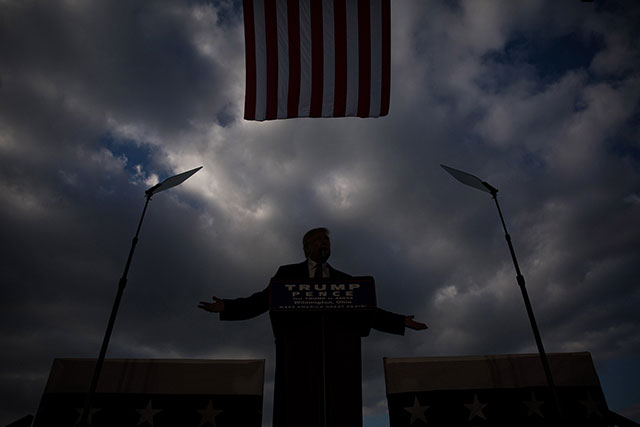 What happens when a dangerous and serial liar like Donald Trump blunders onto an inconvenient and disruptive truth?

The truth Trump is inadvertently pointing to is not that elections in the United States are rigged, but that our privatized, electronic vote counting system is unobservable and incapable of proving that it is not rigged. This is a true crisis for American democracy. Yet, it would be hard to imagine a more unsuitable and uninformed standard-bearer for electoral integrity than Mr. Trump. His glib debate-night plan to hold America “in suspense” about whether he would accept electoral defeat was coupled with some racially-tinged nonsense about “voter fraud” in the millions, and the nonsensical proposition that Hillary Clinton should not be allowed to run for office because of her email-related issues and other supposed disqualifiers.

Predictably, Trump’s message about “rigged” elections immediately resonated with his faithful (a significant bump in his poll numbers was detected). At the same time, it predictably provoked a rousing chorus of official denial, proclaiming the virtues of American democracy and the unquestionable security of our elections. These ringing assurances have come from all quarters of the political and media establishment, from president to pundit.

Lost, though, in the bipartisan condemnation of Trump and passionate renditions of America the Beautiful is an undeniable reality. Our computerized, unobservable vote counting system actually cannot prove or demonstrate that it is fraud-free. It simply cannot answer a challenge to its fidelity from Trump or anyone else, whether the challenge is justified or baseless, sincere or cynical.
Keep reading at Truth-Out.org (opens in new tab)

Q: In 100 words or less, tell me what you believe is happening with American elections.

A: Computerized vote counting has opened the door, over the past decade, to large-scale fraud and election theft.

Virtually all the vote counting equipment is produced and programmed by a few corporations with right-wing ties. There is strong and pervasive forensic evidence that votecounts ….(read more)

Q: How do you know the computers on which we vote are so susceptible to fraud?

A: There is virtual unanimity among the experts who have studied electronic voting that insiders or hackers can change the results of elections without leaving a trace—at least not the kind of trace that any election administrator is likely to find. These studies have come from institutions such as Johns Hopkins, Princeton, the University of Michigan, The Brennan Center for Social Justice at NYU,  … Read More

CODE RED: Those Are OUR Fucking Ballots! from Dorothy Fadiman on Vimeo.

Nothing should be more self-evident than the simple statement that for an election to have legitimacy the counting process must be observable. If the votes are counted in secret “behind a curtain,” it does not matter how or by whom, the results lack legitimacy. 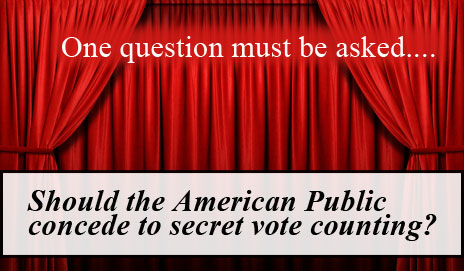 “Jonathan Simon’s research is thorough and his case is more than compelling … He has provided an important public service.”
– John Zogby, founder of The Zogby Poll